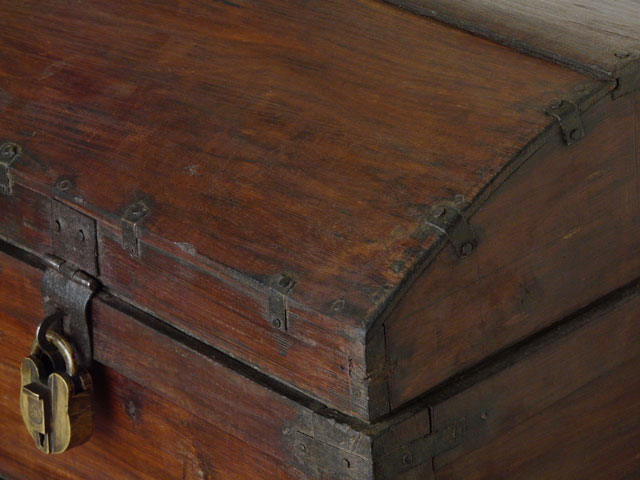 He repeatedly tapped and scraped the wooden cell door, to the point of digging a trench with his slender finger, seeking the wandering attention of his keeper.

The rhythmic sound was interrupted only by the deathly quiet, when he strained for the slightest sound of curiosity.

No more tapping or scraping for a spell or the human might get spooked. He turned his creaking neck to lend his ear some room. The soft touch of flesh upon his cell door caused his heart to race. An ever-so-slight crevice breached the darkness but was quickly slammed shut again, dashing his momentary excitement.

Footsteps fled hurriedly away, and Trunkle dropped his hand to his side in disappointment. It’s been such a long time, he thought. That could mean either good or bad. Good if the human’s will was stretched thin. Bad if the evil one had sunk his claws too deeply into the flesh. Only time would tell, but his spirit was at low ebb. He had grown weary of his dark, cramped hovel. The spider’s delicate and spindly touch tickled his joints and made him itch, which put him in a foul mood.

He wriggled against the wood pressing claustrophobically against his face and nestled his back into the pile of “fat” clothes that was his bed, eagerly searching for stingy space. He cast a peripheral glance of his steely eye toward the “safekeepings” his human had tucked away around him, as if they didn’t exist, but could not bring himself to toss out. Treasures he came back to in moments of weakness. A smile slipped across Trunkle’s scarred face.

It was a day by his estimation before he heard footsteps once again. Delicate at first, then they became more assertive as they approached. Then stopped. Trunkle began to sweat and panicked when he heard the footsteps slowly moving away.

The footsteps stopped again at the sound, then turned back reluctantly. Trunkle tugged them along.

The trenched and splintered wood made his finger sore, but it was how he summoned his human, and the human often surfaced like a pond-fed fish.

A crevice opened, slowly, just enough to expose a large eye peeking in. It was a rather nasty eye too, one of pure blue crystal. Trunkle shivered with excitement. Seconds from now, if all went right, he would be stretching his legs and arms within his human’s embrace, and then he would launch his attack, subtly at first so as to win the heart, then overtly because he had no time to waste. The evil one had made in-roads with his human, so playing the long game was no longer an option. If he wasn’t aggressive, he might find himself locked away forever, and that made him nervous.

As the crevice opened wider, Trunkle reached his pleading hand toward the eye with as innocent a smile as he could muster, but when the light twinkled off his steely eye, the human squeaked (or at least it sounded like a squeak to Trunkle, a pathetic squeak, like that of a mouse when being squashed) and hastily slammed the crevice closed.

Trunkle let out a painful groan as the darkness smothered him again and the wood pressed abruptly against his cheek. In desperation, he thrust his sore finger back into the splintered trench and . . .

The human gasped beyond the darkness, and, at that, Trunkle relaxed. A good cry would have been better, but he would take a gasp. He could work with a gasp.

Trunkle stopped the tapping and digging and pressed his fingertips and ear against the trenched wood. “Come on,” he whispered. “You can do it. You know you want to.”

The crevice re-opened, just enough for the human’s eye to peek within. It squinted as if in obedience to a smile, and then the wooden cell door flew open. The brightness blinded Trunkle, and he shielded his disfigured face from the noxious beams with his frail and withered arms. The human gently took hold of Trunkle, lifting him from the wooden chest with great care, as if holding a newborn for the first time. Trunkle’s limbs dangled about grotesquely, creaking with every limp and lifeless movement.

He held Trunkle out at a distance and examined him with a wince. Trunkle always wondered if he should be offended by the wincing, but that was expelled from his mind by the embrace that typically followed. Not disappointing, the human pulled Trunkle to his chest and squeezed him tightly, like a long absent lover. Trunkle smiled as his limbs rejuvenated in response to the human’s heartbeat pumping feverishly against his torn and ragged ear.

Clutching Trunkle intimately against his chest with one hand, the human examined the contents of the wooden chest with his other hand. Trunkle basked in the guilt coursing through the human’s heart as he riffled through his hidden treasures and gave them a few minutes of long-neglected attention. Begrudgingly and yet by conviction, which irritated Trunkle to no end, the human closed the chest and sighed longingly after those shut away treasures.

He placed Trunkle sitting up against the bed pillows. While pacing beside the bed, he stared down at Trunkle for several minutes, pondering what to do with him, then he flopped down on the bed in front of Trunkle smiling, which cooled Trunkle’s heart.

“I’ve been meaning to talk to you,” said the human, a bit nervously and with a shaky voice, as he glanced over his shoulder to see if anyone was coming or listening. “I . . . um . . . need some advice.”

The human squinted as if in pain, then leaned over and whispered into Trunkle’s tattered ear. The soft, guilty voice was moist against Trunkle’s face, and an evil grin slithered across his teeth.

Trunkle took the human’s face delicately within his weak and tiny hands and looked lovingly into his lonely eyes. This was the most important part–to make the human believe that Trunkle loved and cared for him and could make him happy. The human struggled to maintain eye contact, like a nervous mouse in a field of hawks, with steely eyes bearing down. Noticing the doubt, Trunkle tugged the human’s cheeks toward him and whispered into his ear. The human closed his eyes and nodded.

When Trunkle released the human’s cheeks, the human sat up and looked away from him, staring off into the distance, deeply contemplating Trunkle’s advice. He slowly rose from the bed and exited the room without even a glance or “thank you” to Trunkle, but that was okay for Trunkle. Gratitude, a weakness in humans, unsettled Trunkle’s stomach, so he much preferred his humans to remain aloof.

Comfortable, after such a long stretch of misery, Trunkle reclined against the pillows, and stretched his severely cramped and squeaky arms and legs. A spider tickled out of Trunkle’s aching joints, whispered across his stiff leg and onto the bed, then bolted for cover within the darkness and sanctuary of the wooden chest. Trunkle smiled with relief.

It was the best night’s sleep Trunkle had enjoyed in months. The freedom of the open air and the human’s attention had brought life back to his dwindling limbs and body. He sucked on his raw finger as he planned his next move, but the human was long in his absence, which made Trunkle fret.

He was sound asleep when his human finally returned, broken and in tears. He was startled by the sound of sobbing and things being tossed about in the next room. He braced himself because such moments could be very good or very bad.

The light switched on in the hall, causing Trunkle to twitch. With determined steps, the human entered the room, approached the side of the bed, and looked disdainfully down upon Trunkle with those nasty crystal blue eyes. Trunkle tried to sink deeply into the pillows and out-of-sight, sensing the human’s anger. Humans were nastily violent when they got angry. He reached his sore finger up to his face, sliding it along his battle scars, reflecting on such precarious moments. Anger could be used to great advantage, but it was a delicate balance, and the slightest error could have eternal ramifications. Trunkle shuddered at the thought.

The human grasped him roughly by the arm, obviously displeased, yanked him from the bed, which caused his limbs to fly about in an undignified manner (Trunkle would not soon forgive this slight), and then walked over to the trash can, dangling Trunkle threateningly over the black abyss. Trunkle clinched his eyes and teeth, readying himself for the unpleasant fall and impact, but they never came. Instead, he felt the human’s hands trembling.

Ah! Now this is an auspicious turn of events! he thought.

Trunkle turned his creaky neck and, with his steely eye, locked entreatingly into the human’s vulnerable gaze. The human squeaked again (Such a dishonorable sound, Trunkle thought), walked over to the wooden chest, opened it, tossed Trunkle inside, and slammed shut the wooden cell door, harshly against Trunkle’s back.

The human could not bear to part with Trunkle; not just yet.

Trunkle nestled into his “fat” clothes bed and smiled, ignoring the returning tickle within his joints.

Inspired by: the herd and I, and the animals laughing.

9 thoughts on “Treasures of the Wooden Chest”

Follow The Daddy Blitz on WordPress.com
Join 1,843 other followers