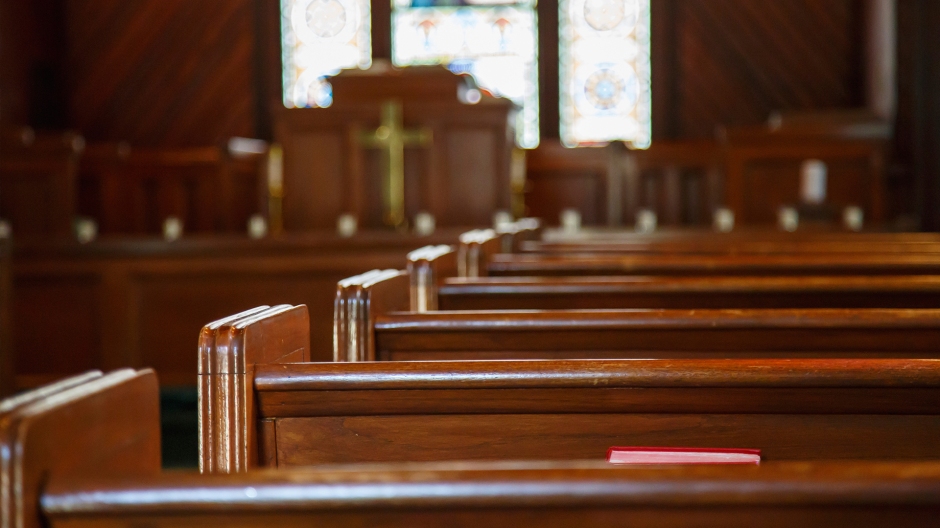 While sitting in church this past Sunday with 3 of my 5 boys, I suddenly felt the pew shaking during the sermon. I glanced to my left, and two of my boys were in the midst of a “try hard not to laugh when you aren’t supposed to” moment.

Most of us have been there–when laughter is mercilessly suppressed by silence and scorn, causing tears to leak from the eyes and the body to tremble.

And, yes, I did exactly what a parent is not supposed to do-I scowled and signaled a cease and desist demand. In response, water started bubbling over the dam.

Such moments always remind me of my late mother-in-law, Susan, who was one of the most frequent pew shakers known to man. She brought tissues to church, less for sadness and more for happiness.

When certain songs graced the bulletin, choir members were put on notice not to look at Susan, who sat right in front of the choir. To this day, I cannot listen to “Here I Raise My Ebenezer” without at least a smile because that one in particular always made her laugh (why, I cannot fathom).

God has a cool way of returning absent souls into our presence.

Sitting in my shaking pew beside my teary-eyed children, the following scripture came to mind:

A merry heart doeth good like a medicine: but a broken spirit drieth the bones.

As I reflected on that scripture, the absence of overt joy in believers’ hearts pressed upon me.

Without such overt joy, churches are often stiff and rigid and filled with bickering over rules, doctrine and etiquette. They are often run like, and have similar problems to, big corporations. Congregants sit stone-faced in church services, many daydreaming, asleep, or distracted by their mobile devices. Children read books, or scribble, or practice origami with thick church bulletins filled with structure and order. And church members often live in fear of anyone finding out about their personal sins and struggles.

As a Presbyterian, I know these symptoms well, as we are commonly referred to as “The Frozen Chosen.”

One thing I admire greatly of primarily African-American churches is the pure joy emoted during their services. Robust and heartfelt singing, swaying, clapping, laughter, smiles, tears, and shouts, all expressions of pure joy in the Lord. Not only do the pews shake, but the floors and walls tremble with enthusiasm.

These churches seem to get what so many miss–the Gospel is about rejoicing in the Lord and what He has done for us. In recognition, church services become celebrations and expressions of thanksgiving. And this joyfulness follows church members into the world, into their daily lives.

In contrast, so many other church services feel like funerals. But why?

Are Christians sad that God saved them
and that their sins are forgiven?

Shouldn’t congregations be shaking the pews,
floors and walls on Sunday mornings?

Yes, Christ died for the sins of believers, and Christians should be remorseful about that, but the story doesn’t stop there.

Christ is not dead.

He rose from the dead!

He has risen indeed!

When Jesus brought Lazarus back from the dead, I imagine there was a great celebration, not a quiet gathering of frozen friends and family. See John 11.

I am reminded of the story where David returned the Ark of the Covenant to the City of David. While marching to the City, David and the Israelites “celebrat[ed] with all their might before the Lord, with castanets, harps, lyres, timbrels, sistrums and cymbals.” 2 Samuel 6:5.  David and the Israelites brought up the Ark “with shouts and the sound of trumpets.” 2 Samuel 6:14-15. As the Ark was entering the City, David was described as “leaping and dancing . . . before the Lord with all his might.” 2 Samuel 6:14, 16.

Michal, daughter of Saul, was watching the celebration from a window and was horrified by David’s undignified conduct. When Michal confronted David, he responded:

It was before the Lord, who chose me rather than your father or anyone from his house when he appointed me ruler over the Lord’s people Israel—I will celebrate before the Lord.

David was so joyful in his worship of the Lord that he demeaned himself in the eyes of Michal and others.

David did not have a funeral mentality; he leaped and danced with all his might.

A lack of joy, or funeral mentality, seems to be permeating the hearts and souls of believers, with so many obsessed with rules, and sins, and judgment. Church services are somber, and Christians seem more interested in condemning sin than spreading the Good News of love and forgiveness.

I wonder if Christians celebrated Jesus’ resurrection and their faith and salvation, with even a fraction of the enthusiasm of David, if . . .

They would be perceived more as loving,
compassionate and welcoming than
judgmental and hypocritical?

Church rolls would be expanding
instead of dwindling?

Christian influence would be
brimming instead of fading?

There would be less inter-
and intra-denominational
turmoil and division?

The funeral mentality seems to lead the Christian down the path of legalism, with a focus on sin and death instead of on resurrected life and freedom in Christ.

It is for freedom that Christ has set us free. Stand firm, then, and do not let yourselves be burdened again by a yoke of slavery. Mark my words! I, Paul, tell you that if you let yourselves be circumcised, Christ will be of no value to you at all. Again I declare to every man who lets himself be circumcised that he is obligated to obey the whole law. You who are trying to be justified by the law have been alienated from Christ; you have fallen away from grace. For through the Spirit we eagerly await by faith the righteousness for which we hope. For in Christ Jesus neither circumcision nor uncircumcision has any value. The only thing that counts is faith expressing itself through love.

Yes, sin and brokenness are horrible, and believers must be remorseful of them and repent, but that is not the end or the rest of the story.

We are all sinners and fall short of the glory of God. One’s sin is no more worthy of condemnation and judgment than another’s; all sins are rebellion against God.

But the good news, and the rest of the story, is that Christians are no longer condemned for their sins, which were forgiven on the Cross. Christ saved believers from that wretched condition of sin and death. All someone has to do is place his faith in and follow Him.

THIS IS CELEBRATORY NEWS!

So why the obsession over sin and death?

Why worship so quietly and somberly?

Why do churchgoers sit frozenly in their
seats and refuse to clap or sway?

Why are churchgoers afraid of shaking the pews?

Why not worship to the point of shaming Michal?

I recognize that a joyous celebration does not pave over important matters of doctrine, but if there was more joy in the room perhaps there would be less bickering over doctrine.

I also recognize that there are important moments of reverence, such as the Lord’s Supper and Good Friday, where worship may be more appropriate in the vein of a funeral than a party.

As we are told in Ecclesiastes:

But Christians seem more comfortable embracing a time for morning and weeping than a time for laughing and dancing.

And, yes, I know there are many Spirit-filled worship services out there without charismatic congregants. I also recognize that people have differing worship style preferences. I’m not advocating a one-size-fits-all style. What I am getting at is the joyous heart, however that manifests. I just have difficulty seeing the true David-like rejoicing in a funeral-like service, and I have trouble seeing the joy in believers’ hearts who so quickly condemn the world and other Christians.

When someone shakes the pew trying to suppress a spirit of laughter and joy, I have to wonder if we are missing something very big here-the party elephant in the room, so to speak. 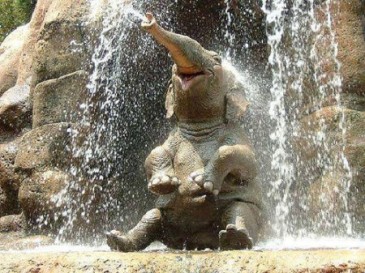 People who know me may be surprised at this post because I am very quiet, reserved and introverted. Even if I attended a celebratory worship service, I likely would not be the one screaming “Amen!” or dancing in the aisles. But looking around at the world, the absence of joy in the Lord is obvious to me, and the Church is suffering because of it.

While I may never wave my arms in the air like I just don’t care, I would love to be surrounded by pew shakers, and I think the world would as well.

Follow The Daddy Blitz on WordPress.com
Join 1,842 other followers